Cycling in France on the Eurovelo routes

Cycling in France on the Eurovelo routes

This is the first post in a 3 part series describing my 12 day tour in France.  I was realizing a 2 year old goal, to explore the Loire Valley and Kings Chateaux.  For this tour I am cycling in France on 2 of the Eurovelo routes, EV 1 along the Atlantic and EV 6 along the Loire.

As the sun sets on the Loire…

At a camping site on an island in the middle of the Loire next to the town of St Florent-le-Veil, at 10:30 I am watching the last bits of light fade off into the distance, while the frogs, swans and other nocturnal animals start to come to life.  I had just cycled around 50 miles over the course of 6 or 7 hours visiting kings castles, eating delicious food and seeing peaceful and awe inspiring natural beauty.  it was not a huge distance, but I was not in a hurry and the pace allows me to stop and enjoy the places I pass through.  In Western Europe, the sun rises around 5:45 and does not set until close to 10:00 p.m.  At 10:30 the last vestiges of daylight are finally receding under the horizon, waiting for another day to return to share with us the beauty that is La Loire.  In those 16 hours of daylight there are many miles to cover, numerous small villages and vineyards to pass by, historic chateaux to visit along the Loire River or coast line to look at in awe and wonder.

I recently returned from a long vacation in France and Spain.  A part of this vacation including bike touring a couple of established bike 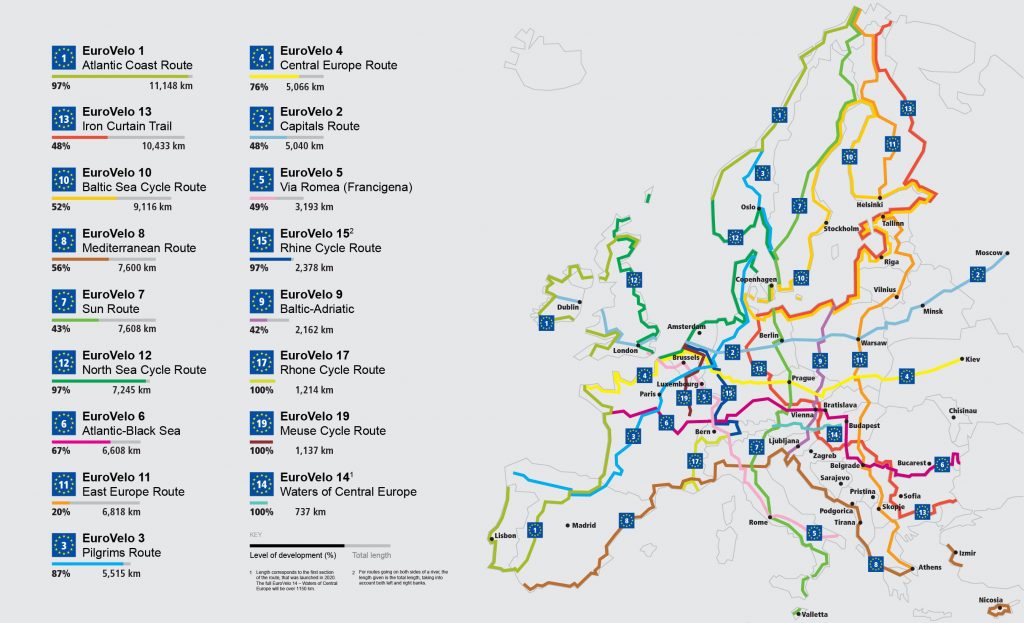 paths, notably the Vélodyssée and La Loire à Vélo bike routes. These two bike touring paths are just two of many government supported and funded (through Brussels and the European parliament) “pistes cyclables” that connect with all over France forming a network of several thousand miles of bike and pedestrian friendly trails all over France.  The Vélodyssée and Loire à Velo paths are a part of the larger  Eurovélo system, which promotes environmentally friendly cycle tourism that is highly beneficial to small local economies.  In France alone there are over 19,000 kilometers of bike friendly routes.  The Eurovélo bike network is an extensive European wide system of 18 bike touring paths that enable a person to comfortably ride from Spain to Norway, France to Bulgaria or The Netherlands to Italy for example, and everywhere in between! The network includes all 42 European countries.

In the two weeks that I was able to bike tour in France, I connected a northern section of the Eurovélo 1 route( also called Velodyssée) with the Eurovélo  6 route( La Loire à Vélo).  By connecting these two paths I was able to cycle along the Atlantic coast as well as along the Loire River, a UNESCO Heritage protected site.  La Loire is the last and only wild river left in France.  This means that the river not damned, diverted or in anyway changed by human means and is home to immense natural beauty. The Loire truly is a nature lovers dream, full of sandbars and islands, birds and swans, grasslands, vineyards and of course Chateaux!

What is great about these bike and multi-use paths, and often in stark contrast to my experiences in the United States, is the placement of distance and service signs and distances every few kilometers and at intersections that create a very user friendly experience.  Although there are apps, websites, and print guidebooks, which I used regularly for directions or to find out information on the route, this can almost be done entirely tech free.  Even finding lodging last minute was not too bad of an issue, I was always able to secure a camping site or if the weather was inclement, get a hotel.

Imagine being able to tour the entire distance of the Connecticut River, with a mix of car-free multi-use trails and paved roads from the Quebec border all the way to the Atlantic coast. Imagine also if there existed an infrastructure of hotels, restaurants, camping sites, maps or websites, and bike shops along the 410 miles from Canada to the Atlantic ocean to make that a fun and comfortable multi-day tour.  Close your eyes for a minute and just picture the same infrastructure for the rail trail that links Amherst and Northampton with New Haven Connecticut.  That is what the bike touring in France is like, fun, accessible and economically rewarding for communities along the path.

Starting the journey, Up the coast.

After spending a few days visiting with my friend Val and her daughter, I pulled out of La Rochelle on a bright Sunday morning after saying good-bye.  I was excited to be back in the saddle after 5 days off.  Val was able to teach me about the Ile de Re, it’s history, beaches and salt marshes. Now though, the body was ready to be back outside in the sun, the wind and the fresh air!  The area just north of La Rochelle is called La vendee.  This a flat region notable for marshes. grasslands and lots of wind!!  The first half of the day my route led me past the manmade canal linking Marans with La Rochelle.  It was an easy ride mostly covered by trees, passing by short 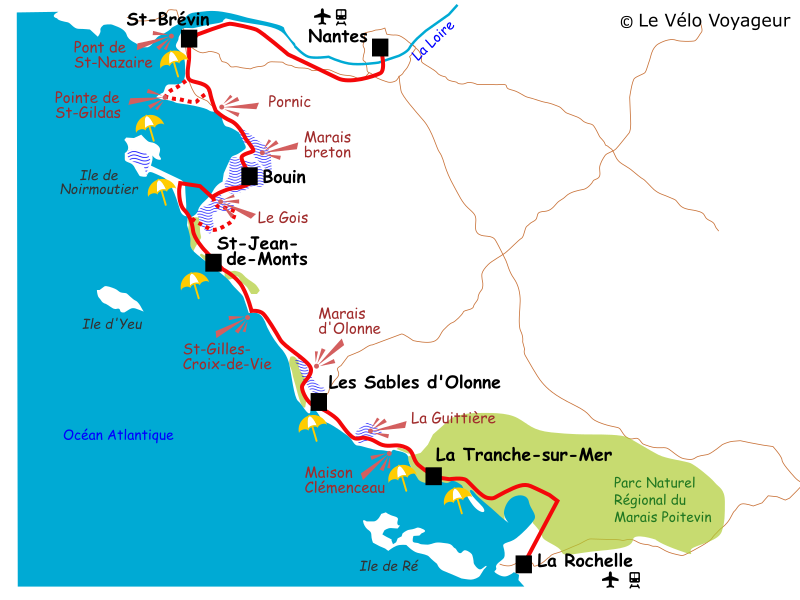 sections of fishable waters where men, and families sat in the late morning hoping to catch some fish.

At a certain point, near the town of Marans, I turned a corner and from then one I seemingly pushed against the wind no matter what direction I was riding.  Working towards the ocean I knew that when going into heavy winds, to just take it easy and put the bike into a low gear.  Taking my time and enjoying the sites and places I was in.

Bike touring is as much about meeting and talking with people as it is visiting towns and monuments and seeing the sights.  Towards the end of a long first day(70 miles) I have a chance encounter with another group of cyclists.  I strike up a conversation that has stopped for lunch.  We’re chatting about places to stay, the trail conditions and where we are all from(en Francais bien sur!!).  Having expressed that I am looking for a place to stay, they invite me to camp with them at a campsite they have reserved not far La Tranche-Sur-mer.  They end up being a group of around 40 different people who are advocating for more bike travel and sustainable tourism.  How fitting given that the Eurovelo trail network can literally take a person from the coast of France to the Black Sea of Bulgaria, or From Norway to Spain passing by towns, cafes, campsites or shops that all benefit greatly from cyclists taking their time and enjoying the ride.

After having eaten well last night and this morning, having made new friends and watched a presentation by Baptiste, who recently returned from his around the world bike trip, I am off and going again on my own to continue along the coast.  I pass by numerous beach towns full of the “salt-life” culture of any beach community; tourist shops, small seafood restaurants, pine forests with trees shedding their fragrant needles onto the soft sandy ground, crunching under foot and tire. With mostly uninterrupted views of the salty, deep blue Atlantic ocean throwing wave upon wave up along the rocky, wild coastline, I think about and imagine living here breathing in the salty fresh cool breezes.

It looks like it is going to rain and I am getting tired.  I decide to look for a hotel.  I have some camping gear but don’t have a tent.  And so I am reluctant to camp if the weather is bad.  St. Jean-Des-Monts looks like a nice place!  I book a really nice hotel.  Feeling guilty about getting something so nice I tell myself I won’t do it again.

For me it is important to think about the history of living here and of these towns being a port of departure for so many earlier French fleeing for La Nouvelle France in the 16th century.  This coast was at one time a starting point for immigrants to Quebec, for explorers in the 1500’s, for the unfortunate slave trade.  There is so much rich history.

47 miles on the second day, life could be worse.  Hamlets of oyster farmers with names like Port Du Collet and Les Moutiers-en-Retz, selling their catch directly from the stores across the road from the boats.  Multi-colored buildings housing fishing gear and host giddy tourists and cyclists.  We are the only people around.  I would love to spend more time and eat about 2 more dozen oysters but I must go on.

After cycling through small villages with views of the ocean, I finally pull into the port town of Pornic.  It is an historic fishing town with gray granite block buildings, boats floating and bobbing in the harbor tied to their small buoys waiting for the owners to return.  It is low tide and many boats rest on their sides.  I grab a beer and think about where I am going to stay.  It is a daily ritual and always a pleasure after being on the bike for up to 8 hours per day.  I search in vain for a campsite I heard about, but find it is too far out of town.  I consider wild camping behind a building but realize there would be too much foot traffic.  So, reluctantly I pay for a hotel and the comforts of bed and a shower.

My last day on this short section of La Vélodyssée  will eventually connect me with the EV6 route, more commonly known as La Loire a Velo.  Like always upon waking up, I don’t quite really know what my destination is other than it’s after a long and enjoyable day of riding!  I cover 50 miles.

Passing through towns with names like Le Cormier, St Michel Chef Chef, Bouguenais or La Montagne.  I continue to absorb the views I have by now become accustomed, and love.  I stop to admire the quiet of the pine forests or the smells of the ocean of the rugged coast.  Another ritual, eating a second breakfast of coffee and pastry, or possibly a late morning sandwich.  Fuel for a few more hours until the next break.  Typically I  meet somebody and have a conversation about the trail or America.  I round the coast after St. Brevin and Saint Nazaire, the wind continues to pummel me and makes me work.  It is here that I officially cross from the Eurovelo 1 to the Eurovelo 6 route.

The new trail takes me pass by earthen raised dikes, unique funky stilted fishing lodges with large nets that are dropped in the river to catch fish.  There are horse and cow farms on the inland sides.  The river gets progressively more narrow, more wild looking, and but still retains its quick current.  Closing in on 4:00, I stop in the town of Pellerin.  It is a small village built right on the edge of the river with it’s former 18th century docks now turned into parks and walkways.

My journey has just started to unfold, the first few pages have been written, but I can feel there is much more to come from cycling in France on the Eurovelo routes!

Book Your Trip
Go to Top