Nestled in a small Northern Ohio town is a special museum unlike many others.  What started as a private collection from a bike enthusiast has grown into “the largest collection of Schwinn bikes in the world”. The Bicycle Museum of America.  In an old 19th century brick building in the small town of New Bremen, 90 miles south of Toledo (my hometown), lies this unique and

interesting museum dedicated to the history of bicycles.  I first found out about this cool museum from an article (backpedaling into History) in the June 2021 Adventure Cycling magazine which you can read in the preceding link.  I decided that the next time I was home for the holidays or on vacation I would make a point to visit.  At $3 for adults how could I resist!  I grabbed a friend and drove down for the afternoon.  We both were pleasantly surprised at the cleanliness and organization of the museum.

Housed on three floors is a collection of 208 bikes; a fraction out of 800 total bikes!!  The first floor contains all the bikes dating back to the early 1800’s.  There are penny farthings, the “boneshaker”, velocipedes and many others.  The oldest bike is the Draisine, built originally in 1816 in Germany out of wood, including the wheels and spokes. It is unique in that it does not have pedals, but rather is a bike that you run on. I think that is pretty cool!   It seemed to be that bike makers did not produce pedals until the 1890’s.

What really surprised me most after looking at the diverse display of bikes is the fact that little has changed in the overall geometry of the bike since then.  This includes the “safety bikes” that started to be produced in the late 19th century (1886 in the article).  I guess bike makers hit upon a style and shape that worked and stuck with it; only making small changes over time that made sense and improved comfort and performance.

The second floor contains more modern bikes and racers and shows how speed and performance became more important. There are also a few bikes owned by the late Robin Williams, who was an avid cyclist.  There is his 1992 yellow Zipp and a mountain bike.  Robin felt strongly about cycling and how it improves mental health.  Robin was known to accompany Tour de France teams during the tour.  I can attest personally of the positive influence cycling has had for me and my own mental health, and overall well-being.  I always feel better getting on the bike and exposing myself to the elements for a few hours. 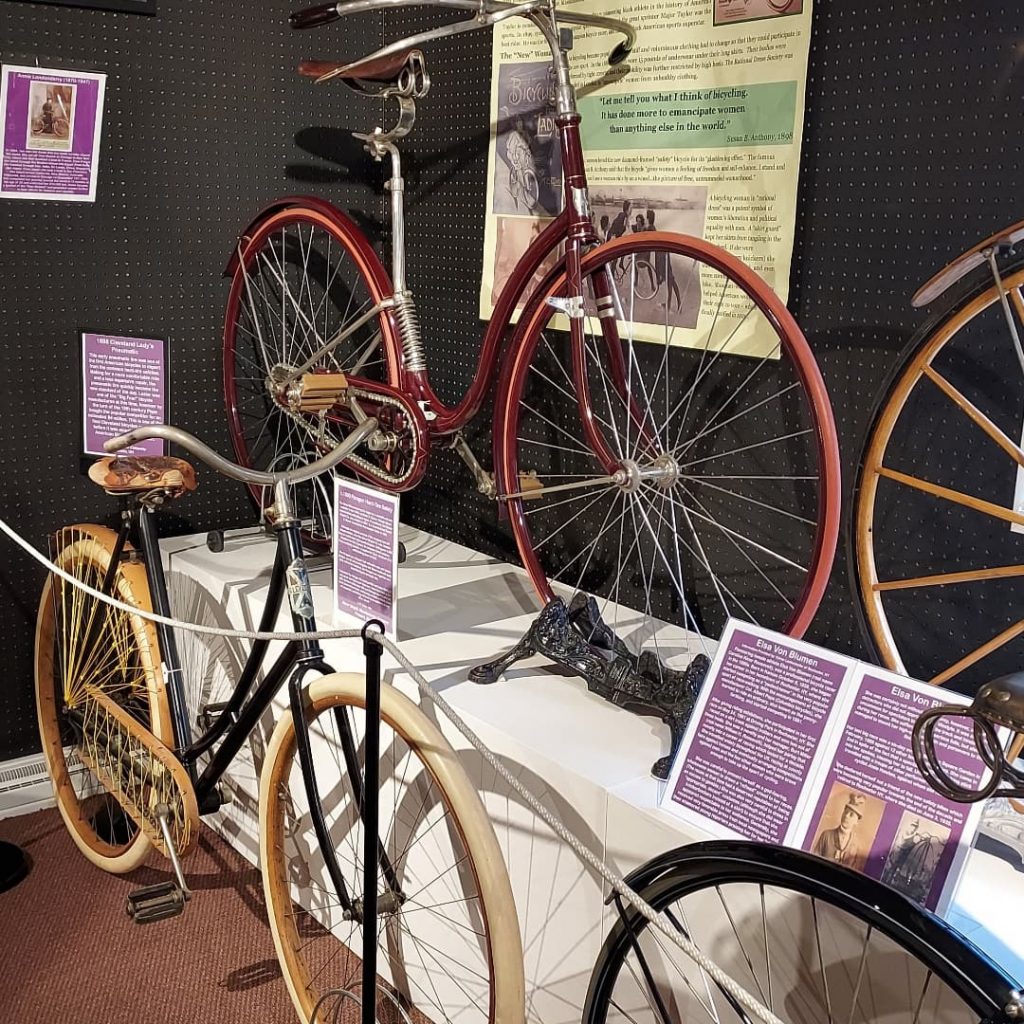 One other bike that was a totally new design to me and one that struck me as super unique is the Delta 7. According to the website, the company “uses an aerospace, high performance, multi fiber strand, each strand a super fiber woven into a structural grid”.  This bike is made in Utah and is claimed to be “the next generation of carbon fiber Superstructures”.  But you’ll need deep pockets to buy one. I do know I would love to try one out though!

There is a lot to say about The Bicycle Museum of America. It has a rich and diverse array of historic and rare bikes.  But don’t just read about it, get yourself to New Bremen sometime and see it for yourself.  Ohio is making cycling accessible to as many people as possible.  In fact, they have published a nice selection of online maps.  I suggest reading about them here: Top 10 Rail Trails or The Rails to Trails Maps.

Ohio may no longer be where I live. However, I truly feel there is so much to see and explore in the state. So much that I unfortunately did not know about while a resident!  I will add some of these other places to visit to my vacation bucket list for when I go back!

Book Your Trip
Go to Top